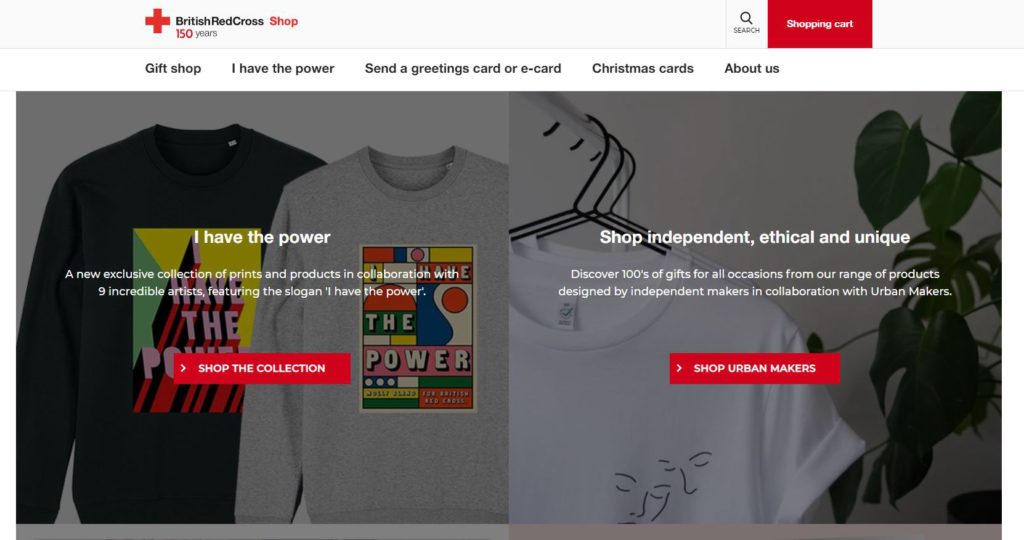 E-commerce of the British Red Cross

The giftshop.redcross.org.uk is a place for people to explore and shop for products, knowing their purchases will have a powerful impact by supporting the British Red Cross. It functions as a space for the British Red Cross (BRC) to showcase products that reflect the organisation’s values and allows supporters to reach the organisation in new and engaging ways as well as increasing revenue.

E-commerce at the British Red Cross wasn’t an area that was getting much attention prior to 2019 internally or externally. Yet, the market and competitors showed clearly that there was an opportunity to utilise eCommerce as an alternative fundraising and supporter engagement tool. Allowing supporters to connect with us and showcase their values through their product choices and strengthen an existing (but overlooked) income stream for the organisation.

The process of redeveloping the eCommerce offering began after a cross-organisational workshop in January 2019. The workshop highlighted the above opportunity and as a result 2 eCommerce managers were brought into the Innovation Hub to explore how the British Red Cross could develop new products that would generate 100k profit a year.

The first step in the redevelopment of the British Red Cross’ eCommerce space was to simplify and refine the product offering with the aim of focusing on the purpose of the gift shop: a place for people to shop for products they love whilst supporting the British Red Cross.

With our core products defined and an understanding of the required functionality the site would need, the next step was to redesign the site. Working with a UX designer to ensure that not only the functionality and design but the customers’ needs were translated to the developers. Shopify was chosen for several reasons, but mainly because:

The British Red Cross then began work on building up their product offering. Something which allowed them to understand more about who their current audience was and what they wanted to buy, but also crucially engaging new audiences and how to scale them.

Keeping the organisational values in mind, the British Red Cross wanted to test ethically made gifts, but they also knew that investing in expensive stock without any idea whether it would sell would be risky. As a result, they partnered with Urban Makers – collection of designers and individual makers based across the UK. They listed their products on their site, taking a percentage of sales, meaning they could test product areas quickly and cheaply whilst also supporting small businesses and knowing the provenance of the products.

Another test has been cause-led products — products which acted as an advocacy tool, but also directly benefited one of our services. With the Refugee Art Therapy workshops losing some key funding, they were keen to see if we could create a social enterprise model. Running art workshops where designs produced during the sessions could be turned into products to sell via the gift-shop and returning all income back to the service. In November 2019, the first workshop was held in our Leeds refugee services with a local print-artist.  Some of the designs were then used to create products for the giftshop.

Initial focus has been on gaining insight and understanding who our supporters are, rather than attempting to make quick profits. Along the way, we’ve gathered more than just insight though; and are slowly building a community of supporters that want to help the British Red Cross mission through buying our products.

The team of 2 eCommerce managers have moved from Innovation to be embedded into the Fundraising directorate, to explore how the British Red Cross can generate 1M in revenue in 3 years. As ambitions grow, the focus will move on how we can cultivate a place for people to shop for products they love; growing the community of supporters whilst continuing to iteratively improve based on insight and feedback.