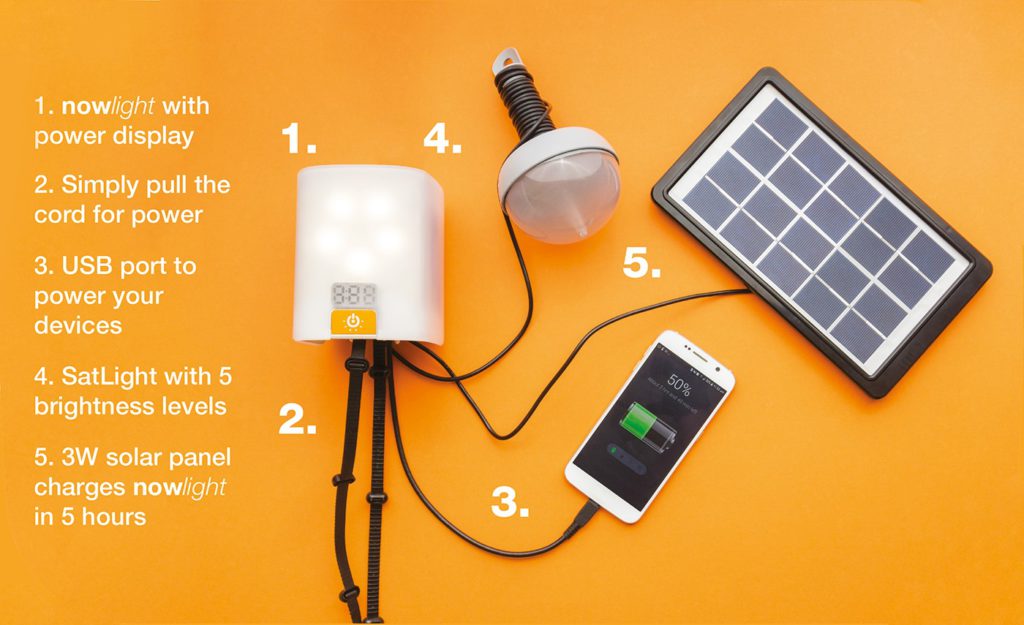 NowLight is a manual generator that allows users to create power from the pull of a cord. Unlike other sources of electricity, NowLight does not rely on external factors such as sunlight or a power grid.

Almost all sources of electricity rely on something that is outside of the user’s control. For example, conventional generators rely on a supply of combustible fuel like petrol or diesel and solar solutions rely on sunlight. If you rely on solar but run out of power at night, you will be unable to generate electricity until morning. Solar panels must also be left outdoors in order to generate electricity and may be vulnerable to theft in some areas.

NowLight allows the user to convert their own effort into electricity. It can be used to generate power at any time and almost anywhere. NowLight is a truly independent source of electricity that can provide lighting and power for small devices. It is especially valuable in contexts where other sources of power may not be reliable.

NowLight can also be charged from a solar panel and USB power sources. Therefore, users can make the most of sunny days and grid electricity where they are available. However, they do not have to rely on them.

By pulling on a loop of cord, the user turns an alternator and generates up to 20 Watts of power, which is stored in NowLight’s battery. NowLight has an integrated LED lamp and can also provide power to up to two peripheral ‘SatLights’, which connect to the NowLight on 5-metre cable

While converting human effort into electricity is not a new idea, most existing solutions were inefficient and impractical. For example, when cranking a wind-up torch, the user holds the device in one hand and cranks with the other; only harnessing the muscles in one arm to generate power and typically creating just 3-5 Watts of power. Furthermore, the cranking motion relies heavily on the small muscles in the forearm, which are relatively small and will quickly fatigue. In other words, wind-up torches cannot generate much power and most users can only crank the torch for very short periods of time.  By contrast, NowLight is designed to be fixed in place with a hand-over-hand charging motion. This motion recruits the much larger muscles in the upper arms and back. As a result users can generate far more power (up to 20 Watts) and they can sustain the necessary effort for longer periods of time. While NowLight is typically fixed to a wall or ceiling, the ‘Bootstrap’ attachment allows the user to charge NowLight while it is on the ground, utilising their own body as a counterweight.

NowLight’s pull cord is made of 16 identical plastic links. If one of these links is damaged or breaks it can be easily removed with tools that are built into the NowLight’s outer case. The broken link can be replaced with a spare or the ends of the cord can be attached together as NowLight will continue to work efficiently with as few as 12 links in the cord. This ensures that the pull cannot become a single point of failure.

While NowLight’s unique value is highly efficient manual power generation, it also has a DC input and so it can be charged from small solar panels or USB power sources. In this way NowLight is not necessarily designed as an alternative to other off-grid technologies such as solar devices, rather it is a complement to them that provides additional reliability.

NowLight was launched in April 2020 and to date it has been distributed on a trial basis to off-grid communities in 12 countries in sub-Saharan Africa and South Asia. Most recently a ‘Pay As You Go’ version of NowLight was developed with a grant from Innovate UK and sales trials are being conducted in Pakistan and DR Congo.

NowLight conveys a range of benefits to users who would otherwise live without electricity, or who only have access to an unreliable source of electricity. These benefits include reduced household expenditure on fuels (for example kerosene or candles), eliminating the need to pay for mobile phone charging and facilitating paid work or education after dark. Overall the benefits of NowLight are comparable to those seen by users of pico-solar products, but with the additional benefit of greater reliability. In all trials conducted to date, NowLight has been supplied with a solar panel but the typical user still uses the manual power generation functionality at least three times per week.

NowLight is significantly more expensive to produce than equivalent ‘solar-only’ products. For this reason we do not anticipate that NowLight will be widely distributed as a consumer product in off-grid areas, except in those areas where sunlight may be particularly unreliable (for example, an area with a prolonged rainy season). However, NowLight is more valuable in emergency response contexts where the reliability conferred via manual power generation functionality can justify the additional cost over solar alternatives.

For example, a NowLight (with solar panel) has been included as part of the equipment provided in over 100 Oral Rehydration Point (ORP) kits that will be distributed by the Red Cross in the event of cholera outbreaks. In this context, NowLight provides a source of lighting that will function at any time of day.

NowLight is also widely distributed in North America and Europe. Deciwatt operates a cross-subsidy model where sales to customers in higher-income countries are used to subsidise the use of NowLight in emergency response contexts.